After a whirlwind year at the helm of Grant Street Dancehall, Dave Maraist resigns as the club's director of entertainment. 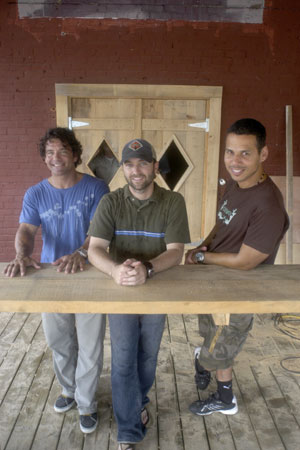 For the last year, Maraist oversaw the revival of the famed downtown musical landmark. The dance hall reopened on the July 4 weekend ' with performances by Jerry Lee Lewis, Sonny Landreth, The Fabulous Boogie Kings and Bobby Lounge ' but Maraist had been hard at work in previous months overseeing the club's $500,000 renovation and expansion that began at the beginning of the year.

"I look at what I was able to accomplish in one year's time," Maraist says, "between the renovations and the shows we've put on in the last six months versus the last 10 years, and I leave with a very good conscience. I don't feel like I've left with things on the down and out, or all of a sudden I left them high and dry by any means."

Maraist is still booking shows for the club and isn't completely pulling up stakes. He says he will continue to be a part owner and book shows, but he's moving out of Grant Street's day-to-day operations to pursue other opportunities, which he would not disclose. "It's no mystery that I've been spending an exorbitant amount of time there," he says. "I'm making a conscious choice that I don't want to do that anymore. I still want to be involved though in whatever way, whether it's one show a year or a month that I help put on."

Maraist's company, DMAR Ventures, still retains part ownership in the building, along with the California-based Wide Eyes Entertainment, which operates Grant Street along with three California locations of the Air-Conditioned Lounge. Wide Eyes President Paulo Emanuele says the entertainment landscape of Lafayette is quite different than the West Coast's. "There's a lot more people touring on the road down there along [Interstate] 10," he says. "There's more competition than California. Down there, there's so many music halls. You know what it is? The casinos. I hate to say it like that, but the casinos have changed the landscape down there. It just makes it more competitive."

Despite that increased competition, Maraist booked a solid roster of local acts and New Orleans bands and managed to secure national headliners such as Dwight Yoakam, Taj Mahal, the North Mississippi All-Stars and Ziggy Marley.

Emanuele credits Maraist for having the vision to revive Grant Street. "As far as I'm concerned," Emanuele says, "Dave's still on the team. He's just not going to go over there and sit in that chair all day long. He's still one of my best friends. I just got an e-mail from him this morning; he's working on another show. I think he's just getting out of the electric chair, so to speak."

Emanuele says a replacement has not been named to fill Maraist's position.