The fight between Freetown residents and an out-of-state developer shapes up as a historic legal case in Lafayette expansion. 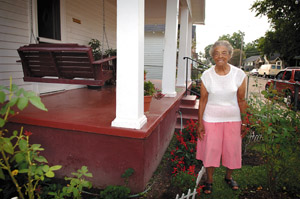 Last Saturday was a typical lazy summer evening in the Freetown neighborhood. Residents gathered on porches, visited with each other as they arrived home from running errands, and took their dogs for walks. On Gordon Street, artist Francis Pavy opened his studio for ArtWalk. In this tight-knit community, you can spend hours engaged in conversation and not make it halfway down the block. Many families have owned their homes here for more than a century, and newer Freetown residents have embraced the quiet streets and witnessed a decrease in the amount of drug dealers in the area.

Now a Birmingham, Ala.-based company, Capstone Development Corp., hopes to build six apartment buildings for university students in the southeast corner of Freetown, on three parcels along the curve of Garfield Street. The mix of two-, three- and four-bedroom apartments would add up to 564 beds.

The prospect that 600 college students could be their new neighbors elicited a swift and negative response from area residents, who've trotted out scenarios of drunken fraternity parties and increased traffic. That response was on display Saturday and at a packed and spirited neighborhood meeting last Thursday.

"Things have gotten a lot better here," says homeowner Paul Potter. "I came in 2000, and I'll never move again. I don't want them to put those apartments down here and spoil the neighborhood. I think it's going to be more trouble than it's worth."

Disputes between developers and residents are hardly new in Lafayette, but this time the stakes are especially high. Lafayette Consolidated Government Planning Manager Mike Hollier says it's a historic test case for the area, because Capstone Development Corp.'s proposal arrives as the Freetown district is poised to adopt its own neighborhood plan. It's also the first time a local neighborhood has vigorously asserted its historic background and character as grounds for rejecting a new development. In both instances, the Freetown conflict will set a precedent for how Lafayette balances the values and aspirations of a neighborhood community against the rights of an individual property owner.

The controversy is also happening at a critical time, as an unprecedented wave of new development is hitting the city and residents are moving forward with neighborhood plans. About 1,700 new apartment units are in the works; in the past, less than a sixth of that figure was considered a major year for development.

And many more proposals could be right around the corner. While the Gulf Opportunity Zone Act of 2005's tax incentives sparked Capstone's proposed development, officials say few ' if any ' of the current 1,700 planned units are Go Zone related.

"People in this community need to know we are getting a lot of development in this area," says Hollier. "It is accelerating maybe faster than it ever has in the past. So the question is, do you want to just react to this development and hope for the best, or do you want to have some kind of guidance on what that growth is ultimately going to be?"

Freetown resident and University of Louisiana philosophy professor Istvan Berkeley has led the fight against Capstone and sees the dispute in a different context.

"There all kinds of references to smart growth that people keep talking about, but what Capstone proposes is a paradigm of dumb growth," he says.

The comprehensive Lafayette In a Century plan has been in development for a decade, as mandated by the state. There are now 10 neighborhood plans ready for review and formal adoption by the Planning and Zoning Commission, according to Planning Commissioner Fred Prejean.

Freetown residents' vision has been in the works since 2002, and envisions the "Parc du Quartier" ' at the same location where Capstone hopes to build its apartments. This park is the centerpiece of the neighborhood plan and includes a terraced amphitheater, Mardi Gras Museum, community center, swimming pool, tennis and basketball courts and other amenities.

Residents have disagreed over details of their own plan in the past, but internal neighborhood disputes have vanished in the face of the Capstone proposal. At last Thursday's meeting, residents overwhelmingly voiced support for the Neighborhood 7 Plan, which encompasses a larger area bordered by Pinhook Road, Johnston Street and University Avenue. Residents "voted" on the plan by filling out a survey, and it now goes to the Planning and Zoning Commission for review and formal adoption.

Capstone Executive Vice President Kent Campbell says the neighborhood's ideas for a park should not be allowed to stand in the way of his company's proposed development.

"It's a great wish list item, but it is simply that," he says. "It is not likely something that would ever come to fruition. There are no funds for it, and no one has ever sought to buy it. If the city council puts any stock in that plan, then they are having the people who own that land have their rights denied. It is a clear violation of property rights."

The Planning and Zoning Commission denied the Capstone proposal May 15, but the City-Parish Council will consider the developer's appeal June 27. Residents who oppose the development hope their adoption of the Neighborhood 7 Plan will solidify grounds for rejection.

With election season just around the corner, the council is widely expected to defer to the residents and uphold the Planning and Zoning Commission's decision, especially since a two-thirds majority is required to overturn it. However, the question remains whether such a decision would hold water against a legal challenge by Capstone. Richard Becker, the attorney representing LCG in the matter, could not be reached for comment.

While residents contend that Capstone stands in the way of their future, they also argue that the project cuts them off from their past. Freetown was settled by free men of color in the 1840s and 1850s, according to local attorney Glenn Armentor, who provides a chronicle of the neighborhood's history on his law firm's Web site, www.glennarmentor.com/history.asp. After the war, Freetown residents formed the "True Friends Society," which battled the Knights of Ku Klux Klan and Riders of the White Camelia. At the turn of the century, descendents of this society built the Good Hope Hall, which is now home to Armentor's offices. The hall featured performances by Louis Armstrong and other jazz greats in the 1920s and '30s, and the field of the proposed Capstone site also hosted an annual street fair and the traveling circus.

"Businesses come and businesses go, but the neighborhood is what you are more concerned about, the people that have been here a long time," says Chris Brooks, who just opened Close to Home Daycare in the neighborhood. "You want to try to preserve all of that stuff."

Capstone's Campbell understands that some residents may regard the development as an invasion of their territory but says that doesn't make them right.

"Certainly I would love it if it were the other way around, but people don't like change," he says. "I don't think anyone has really taken the time to see what we are proposing here. But bottom line is they feel they are entitled to have that field, even though they don't own it and they have never made any effort to purchase it. Nevertheless, we intend to be good neighbors."