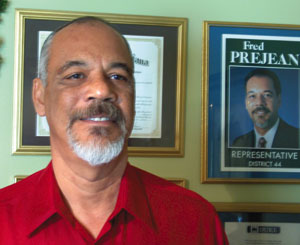 Councilman Chris Williams was opening his mail a few weeks ago and received an invitation from Lafayette Consolidated Government Planning Manager Mike Hollier to a Dec. 15 meeting for a master plan for the future development of North Lafayette. Williams, who's normally at the forefront of any north side advocacy group or meeting, wasn't thrilled with the news.

"I don't know who they conferred with that [said] this would be a good thing," Williams says. "I'm going through my mail, and I get it like everybody else."

Williams has been active in his own efforts to consolidate north side interest groups and sees the meeting ' organized by Planning Commissioner Fred Prejean ' as a politically motivated attempt to usurp his endeavors.

"Fred is running for state representative," Williams says. "So I guess he's trying to make a name for himself." Williams also claims politics played a part in Prejean's recent move to organize a group of ministers to appeal to the council to rename Willow Street after Martin Luther King Jr.

Prejean has already announced his intentions to run for state office in 2007, when north Lafayette state Rep. Wilfred Pierre is term-limited out of the office.

Another name frequently mentioned as a likely candidate in that race? Chris Williams. He is term-limited out of his city-parish council seat in 2007 and is expected to run to replace either Pierre or state Sen. Don Cravins in the state Legislature. Williams says he will announce a decision on his political future next month.

Prejean, a Lafayette native and veteran planning commissioner for more than a decade, says he came up with the idea of developing an official North Lafayette Plan after noticing the fragmentation of the north side community. "As planning commissioners," he says, "we knew of specific progressive things that were happening, but these projects in north Lafayette were all autonomously run. This effort is to pull all these groups under one umbrella and establish a committee of volunteers who want to work on addressing development of north Lafayette."

But Williams says that's exactly what he's already been working on for the past two months. He has been trying to resurrect the Committee to Rebuild Lafayette North under a new name and refocused mission and wants other established north side groups to join and set the agenda for the region's future. "[We're] trying to consolidate and move forward toward one voice so that our city and parish can work together," Williams says.

The Committee to Rebuild Lafayette North, first organized in 1997 by former City-Parish President Walter Comeaux, has been on hiatus since October after the city-parish council voted to pull $36,500 in funding for its consultant and manager, Phil Lank ("Had Their Phil," Oct. 19). Councilman Bruce Conque led the move to place Lank's salary in council reserves, questioning whether that money could be put to better use for north Lafayette.

Williams says Prejean and the Planning Commission scheduled their meeting five days earlier to preempt and undermine his appeal to the council. Williams' motion to restore Lank's contract was denied at the council's Dec. 20 meeting.

"I don't believe [the timing was] a coincidence," Williams says. He also suspects that Conque had a hand in planning the Dec. 15 meeting, but Conque denies the charge. "It was strategically timed to be right before the Rebuild Lafayette North vote to allow some council members an excuse not to fund Rebuild Lafayette North," Williams claims. "I think it's Fred Prejean's plan to make brownie points from an electoral standpoint since he's running for office."

Williams also contends that having a government-run committee taking charge of the north side's future will strip away the ground-level intensity that community organizations bring to the table. "It becomes a vanilla, governmental, non-passionate type of thing," he says.

Prejean, an accountant by trade, responds to Williams' accusations in a calm, calculated manner. He says Williams' charges are unfounded and insists he's not working against Rebuild Lafayette North, but rather hopes to help a variety of groups realize their goals.

"No one group is ever going to succeed in changing north Lafayette," he says, adding that it makes sense to utilize city-parish government resources. Down the road, the committee developing the Lafayette North Plan may request funding from the city-parish council for economic or planning studies. Lank's contract money could be up for grabs for Prejean's new initiative.

State law requires each parish to develop a comprehensive plan through its planning commission. Lafayette's plan, called Lafayette In A Century, maps out everything from commercial districts to parish school plans and street projects.

Prejean says his Lafayette North Plan will be folded into LINC. That could be the plan's only accomplishment, as LCG is not required by law to implement LINC or planning commission recommendations. "So that's the politics that are involved," Prejean says.

He adds that the planning commission has already begun work on plans for eight different neighborhood groups that came to the commission this year and asked how their subdivisions will grow in the area.

The reason Prejean is pushing the Lafayette North Plan is because he wanted to pull together people focused on their neighborhoods or pet issues such as the I-49 interchange, the development of I-10 frontage roads and the renaming of a major Lafayette street after Dr. Martin Luther King Jr. He watched Williams and others lead a charge for I-10 frontage roads at city-parish council meetings this past summer.

"The frontage road issue ended up to many people's dissatisfaction," he says. "I was not part of that, and I sat back and I watched it. I saw the frontage roads as a project that should be part of something bigger. There was no vision of, 'What is this whole area going to look like when these projects and others that are now on the drawing board are completed?'"

Williams isn't warming to Prejean's questions or increased profile. He takes it as a personal affront and another assault on north side progress.

"How many things can you throw at us in one year?" he asks. "We've gone through frontage roads; we've gone through the Martin Luther King name change; now we have the attack on Rebuild Lafayette North. I think that this council has just lost its mind."