Behind the marketing campaign that could bring billions toward restoring Louisiana's coastline. 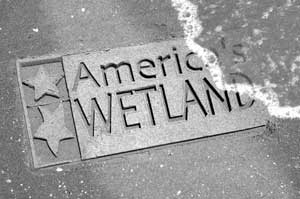 The unusually active early 2005 hurricane season had one positive effect on Louisiana. With hurricanes Dennis and Emily skirting close to the state, national news outlets issued fresh reports about the devastating effect of coastal erosion in their hurricane coverage. Meanwhile, the Water Resources Development Act and federal energy bills started winding their way through the House and Senate, with billions of dollars earmarked for Louisiana's wetlands at stake. As President Bush threatened to strip the coastal funding from the energy bill last week, Gov. Kathleen Blanco issued a personal invitation to the president to tour Louisiana's decimated coastline.

The coast is undeniably vanishing, but now there's a sea change in how it's viewed on a national level. Fifteen years ago, the pleas of state officials and conservationists went largely unheard in Washington. "People had trouble believing it was really serious," says Mark Davis, director of Coalition to Restore Coastal Louisiana. "When you would talk to legislators they would say, 'If it's really as bad as you think it is, someone would be doing something about it.'"

Former Louisiana Sen. John Breaux's 1990 Breaux Act turned out to be a mixed blessing. The bill brings approximately $50 million a year to Louisiana for coastal restoration, but it was quickly apparent that it was merely a grain of sand toward the estimated $14 billon price tag to stop coastal erosion. Davis remembers a particularly telling 1996 attempt for additional funding. "Mid-way through the last Edwards term, sitting down with a senior scientist in Washington, we were told forget it ' Santa Claus came once to Louisiana, meaning the Breaux Act," he says. "It wasn't a national problem."

A decade later, despite the shaky status of new coastal funds at press time, there's fresh evidence that Louisiana's coastline is being identified as a national treasure much like the Everglades or Chesapeake Bay. Adam Sharp, press secretary for Sen. Mary Landrieu, credits cooperation between the congressional delegation, the governor's office, state and local leaders, and a multitude of Louisiana organizations for changing national perceptions of the problem. In particular, he pinpoints the newest member of the team, Marmillion + Company, an advertising agency hired by former Gov. Mike Foster in 2002 to craft a message and tell the story of coastal land loss.

Marmillion's clientele ranges from The American Film Institute to the Florida Department of Transportation, and the firm also handled the election campaigns of Baton Rouge Mayor Kip Holden, Landrieu and Breaux, who brought the firm to the attention of Foster. The state paid $45,000 for Marmillion's preliminary strategic plan.

"When we first came in," says owner Val Marmillion, "we worked with a focus group in Philadelphia. We found out from the group that no one wants a problem like this in their back yard, and that the federal government should fund some of this." Marmillion asked the group several questions:

Which state would you view as most critical to producing and transporting America's energy supply of oil and natural gas?

Which state hosts the largest habitat in America for migratory waterfowl/game birds?

Which state produces and transports the highest volume of seafood in America?

Which state is facing the greatest loss of landmass due to coastal erosion?

Through which state flows the largest concentration of pipelines feeding the nation's energy supply?

"The focus group never guessed Louisiana as the source for these things," says Marmillion. Even more troubling, Marmillion discovered that Louisiana residents were equally unaware of their state's assets.

The company developed five strategic communication objectives to be implemented over the course of three years: public education, media relations, brand and identity, building a class of cooperative organizations, and funding and development.

Coming up with an identifiable marketing brand for Louisiana's coast was his first objective. "These wetlands are like no other," says Marmillion. "Bounded by the Pearl and Sabine rivers, this huge piece of wetland is created by the flow of the Mississippi from the heartland of the country. If you overlay the migratory bird flyway with the geological span of the wetland, we are one of the major access points in America. By erasing the political boundaries, this becomes a broader, American geographical issue." Hence the name: America's Wetland.

Marmillion's strategic plan called for private donations from corporate sponsors who wanted to be identified with coastal restoration. McIlhenny Co. and Whitney Bank were the earliest sponsors, but Shell Oil's major grant of $3 million covered operations for the first three years. Shell Social Investment Manager Mary Margaret Hamilton cites Shell's operations in the Gulf of Mexico as a major factor in the company's participation. "We're vulnerable," she says. "When we don't have the wetlands as a barrier our infrastructure is at risk. The payoff is a viable coastline." Since then, additional oil and gas companies such as British Gas, ChevronTexaco, and ConocoPhillips have signed on as sponsors.

Marmillion broadened the sponsorship base to include companies as varied as the New Orleans Saints, Acadian Ambulance, Cox Communications and the newest sponsor, Gulf Coast Coca-Cola. Melanie Clark, vice-president of marketing for Gulf Coast Coca-Cola, says the franchise got involved because of the importance of the local issue. "This is where we live, this is our coastline, our back yard," she says. "Coke is a way they could get this message right into homes in Louisiana and surrounding states. We put the message in just under 4 million 12-packs that sold in Louisiana, Arkansas, Mississippi and part of Texas."

Coca-Cola included information and coupons about how individuals could help save the wetlands inside each 12-pack. Sending contributions to the campaign rewarded donors with a Save America's Wetland bracelet.

Since late May, when Coke introduced the coupons, America's Wetland has received more than 1,200 donations ranging from $2 to $250. "There wasn't an incremental cost for us to include it in our packaging," Clark adds. "It's important to support initiatives. That in itself is a payoff for us."

Marmillion projects the three-year funding goal of $7 million will be reached by the end of 2005. During 2003 and 2004 professional fees paid to Marmillion accounted for approximately about $2.1 million ' 30 percent of the total contributions to America's Wetland.

Not everybody on the team has been happy with the campaign. In mid-June, New Orleans native Walt Williams pulled his Saturday Night Live claymation cartoon character Mr. Bill out of the America's Wetland campaign. Williams' splashy public service TV spots were placed in Shell-sponsored kiosks ' where the Shell logo is prominently displayed ' in tourist destinations around the state. Williams complained that his contract, which called for no commercial connection with Mr. Bill, was being violated. "I was contributing to the campaign for free, but I was more and more being associated with Shell," he says. "People started asking me if I worked for Shell. My reputation in the environmental community is important. My personal opinion is that the oil companies are responsible for the [coastal erosion] problem, and Mr. Bill was being turned into a marketing campaign for the culprits."

Mr. Bill's withdrawal made national headlines. Williams says the media focus on Mr. Bill garnered more national attention to the campaign than the marketing strategy of America's Wetland. "Mr. Bill is a valuable commodity," he says. "Mr. Bill got all the national press."

Shell representatives declined to comment on Williams' withdrawal from the partnership, but Marmillion takes a philosophical view of the split. "In terms of Mr. Bill, we have worked with Walter before," he says. "We know he doesn't want his product to be associated with any commercial enterprise. I respect Walt's attitude."

Marmillion says that no partner in the campaign is getting all of its demands met. "We have to keep our focus on saving the wetlands," he says. "What was done in the past was mostly done with environmental permits. Beyond that, we don't need to look back. We need to stop fighting a ton of individual battles and work together."

The success of the campaign can be measured by its national profile, says Sidney Coffee, executive assistant to the governor's office for coastal activities. "If you measure it by the national press coverage ' a 23-page spread in National Geographic, stories in the Washington Post, New York Times ' they're calling us now rather than us calling them," she says. "The Louisiana coast is national news."

Coffee credits Marmillion's ability to simplify the message into focused themes. This is a place of ecological significance. This place impacts the nation's energy and economic security. She says these two sentences distill an immensely complex issue. "It allows us to talk to the man on the street or the man in Congress. It's about energy prices, putting the nation's energy at risk."

In dollar terms, the $7 million invested by sponsors could pay off to the tune of $1.5 billion over the next three years, depending on the fate of the Water Resources Development Act and Senate Energy bills.

Marmillion has recently added a third theme that adds a sense of urgency to the need for funding. "This is an emergency situation," he says. "New Orleans has been put on the list as one of the top 10 cities in the world that is poised for some environmental occurrence. We were testing to see if we had the focus right ' did people recognize the brand? Recently, CNN's piece on global warming worldwide focused in on Louisiana when it came to the U.S. That's what I call a return."