Two Lafayette women ditched their high heels and high-stress careers for pole dancing.'
By Lisa Hanchey Photos by Robin May

When it comes to the latest fitness crazes, two professional women are setting the barre - one vertical, one horizontal - right here in Lafayette. Both had dance backgrounds and ditched their high-stress careers to launch barre-based classes. But that's where the similarity ends.

The Vertical Barre. As I write this, my arms are still shaking from my first Vertical Barre session. If you think it's just a pole dancing class, this will "change your perspective," as the studio's saying goes. It sure did for me, as it was one of the most challenging workouts I have ever tried. Owner/instructor Laci Lopez guided us through the gravity-defying moves, starting with tentatively lifting our feet off the ground to boldly pirouetting around the pole mid-air. Ok, I felt like a total klutz, but it was a blast! And I have a new appreciation for the people who can actually do the "tricks" - the upside-down inversions, the 360-degree spins - taught in the advanced classes. 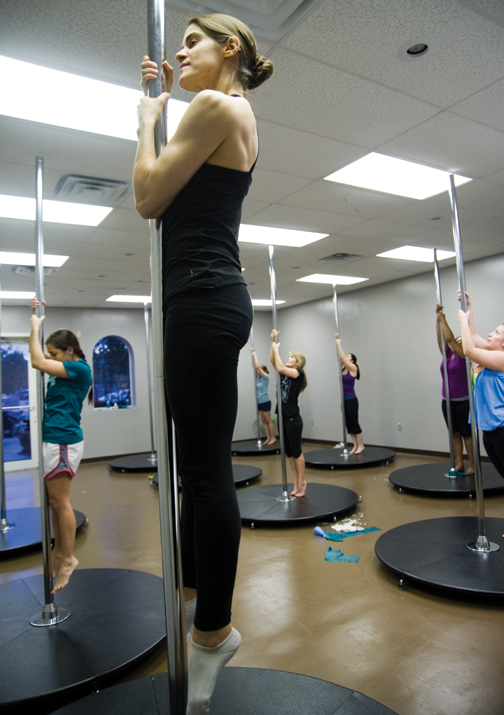 A native of Cottonport, Lopez literally grew up in a ballet studio - her mom's 1,500-square-foot dancing school was attached to their home. But instead of following her Mom's toe-steps, she chose the challenging career of investment banking.

During a visit to Chicago, Lopez's cousin introduced her to a pole dancing class, which rekindled Lopez's love of dance. Fascinated by what she saw, she wanted to learn more, taking classes in New York, California and Austin, Texas. All of the classes were women-only and focused on sensuality, but Lopez wanted to concentrate more on the "tricks." "I was very interested in the physical ability of it, rather than the sensuous," she recalls.

So she quit her job last April and launched her own concept, Vertical Barre, a co-ed aerobics fitness studio.

Vertical Barre focuses on three aspects - co-ed aerobic fitness, classical ballet and Polesque. "Polesque is burlesque meets pole," she explains. "So, it's very sassy, you want it but can't have it' kind of flirty fun."

Lopez chose Lafayette for her studio because of its open-mindedness. "I felt like Lafayette was the most liberal place in Louisiana," she says. "I believe that Lafayette is the Austin, Texas, of Louisiana."

A vegan, Lopez's lithe body is her own best endorsement for the class. In the process of developing her routines, she lost 40 pounds. "I've never had abs before, and now I have a six pack. I've never had arms like I have - I'm in the best shape of my life," she says. "I've never been this strong, ever."

In January, she opened for business at 233 Doucet Road Suite B-4 at the former Camellia Cleaners site. The studio has 10 poles, but no mirrors. "There is no judging here," she says.

Every month Vertical Barre offers free events including "Documentary Night," yoga classes and food and wine tastings that promote a holistic and local lifestyle. For April, the scheduled films are Fat, Sick, & Nearly Dead, Forks Over Knives, The World According to Monsanto, Rango and Blue Gold. Dates and details are subject to change.
For more information, visit www.theverticalbarre.com, www.facebook.com/TheVerticalBarre and The Vertical Barre Fan Page.

Xtend Barre. Lafayette native Natalie DeJean left her legal career behind to launch Acadiana's first Xtend Barre stand-alone franchise. While living in New Orleans, the young attorney took a class and was instantly hooked. She liked it so much that she decided to open her own studio in her hometown.

After finding a space on MainStreet in River Ranch, she delved into the transformation process. The 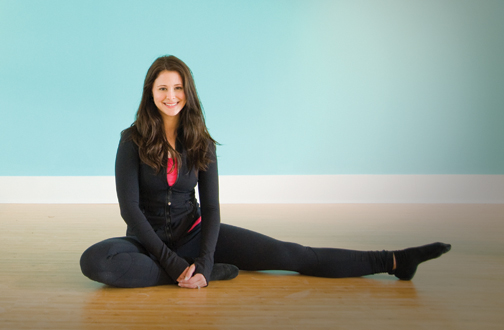 existing blank cement walls were painted in Xtend Barre's signature aqua color. Floors were topped with bamboo and the entry area with grass cloth. The exercise room looks just like a typical ballet studio, complete with bars and mirrors. Opposite is a retail area featuring active wear by Yummy Bodywear, lucy and RESE Pilates. "The workout clothes are great-fitting and make you look a lot smaller than you really are," DeJean says.

Created by professional dancer and Pilates instructor Andrea Rogers in Boca Raton, Fla., Xtend Barre is sweeping the country, with over 60 locations throughout the U.S., Brazil and Canada. Routines combine the elegance of ballet with the core strengthening of Pilates. "It's a 55-minute, fast-paced workout which melds the strength and safety of Pilates with sculpting exercises at the ballet bar," DeJean explains. "It works out the upper body, legs, everything - you get a full-body workout. You can come three or four times a week and, combined with a great diet, you'll see results in two weeks."

As a child, DeJean took dancing from her aunt, who owned Moving South dance company. During college, she took Pilates and "became obsessed with it." Once she discovered barre, she found her calling. "You see results super-fast," she says.

At press time, the studio had not yet opened, so DeJean showed me some of Xtend Barre's signature moves. Reminiscent of Natalie Portman in Black Swan, DeJean flowed through a basic warm up, then transitioned to exercises based on the five basic ballet positions, plies and arabesques. The class incorporates 1-pound weights, stretch bands and small exercise balls. "It's really the only exercise you need," DeJean says. "You get that long, lean, chiseled dancer body instead of bulking up. People are amazed by the results."

You don't have to be a dancer to do Xtend Barre. Classes are limited to 15 students for more personal attention. Private and semi-private lessons are also available. "We teach classes to anyone of any fitness level," DeJean says. "It doesn't matter if you're not even flexible. It's great for guys, especially football players, because they have no flexibility. We'll do a Bring Your Boy to the Barre' class."

All of Xtend Barre Lafayette's seven instructors are Pilates Mat- and Xtend Barre-certified. Xtend requires an 18-hour training course with 60 days to test out. "No other barre program does that," DeJean says.

Xtend Barre Lafayette is teaming up with other businesses for barre competitions. Coming soon is the Zoë's Barre Challenge, where the biggest loser will win free barre classes and food from Zoë's Kitchen. In May, Xtend Barre is holding the Lorna Jane Challenge, where participants who take five classes a week for five weeks will earn a free outfit from Lorna Jane.

Before the Lafayette studio even opened, DeJean was getting bookings for classes. "It's been a huge life change, but it's really fun," she says. "I like it a lot more than sitting at a desk."

Xtend Barre's Grand Launch is April 16 from 5:30 to 9 p.m., with a benefit for the Junior League of Lafayette featuring food from Zoë's Kitchen, Sinless Margaritas, a lululemon athletic trunk show, raffle prizes, and classes at 6 and 7:30 p.m. Donations are $20 for classes with all proceeds going to JLL. Regular classes start April 17 and are offered seven days a week. All registration is done online through the website, www.xtendbarrelafayette.com. New clients get to try their first class for free, and student discounts are available.

Barre Blast. Men have gotten into the barre biz, too. Vince Purpera, owner of the Body Factory, will soon be offering Barre Blast. This workout incorporates high-intensity interval training with ballet-inspired exercises. Unlike the barre-only workouts offered by DeJean and Lopez, Body Factory features several classes, including SPX Fitness (full-body conditioning using the Megaformer Black Pilates reformer machine), RealRyder (an indoor bike with an articulating frame) and yoga.
Purpera was unavailable for comment before deadline. For more information, check out www.bodyfactory.com or contact [email protected]