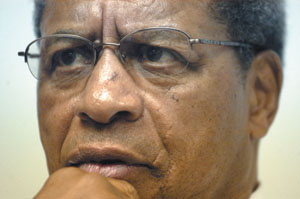 Last week, the Lafayette Parish School Board voted 7-2 to buy out the remaining 18 months of Easton's contract. Board members Mike Hefner and Rickey Hardy voted against the move, calling it fiscally irresponsible. The final cost of the buyout is estimated to be around $282,000, after factoring in Easton's deferred compensation benefits.

Easton agreed to be out of office by July 1, at which point deputy superintendent and Chief Academic Officer Burnell Lemoine will take on the superintendent's duties. At its next board meeting July 18, the board will officially appoint an interim superintendent, likely to be Lemoine.

As deputy superintendent, Lemoine has typically filled in for Easton when he has been away. Lemoine also previously served as interim superintendent in Lafayette prior to Easton's arrival in 2001. From 1986 to 1991, Lemoine was superintendent of the school system in Avoyelles Parish.

The process for selecting Easton's permanent replacement isn't clearly defined. Greg Davis, who heads up the Greater Lafayette Chamber of Commerce's education division, plans to meet with school board President Carl LaCombe this week to discuss plans for selecting a new superintendent. "Whether or not the chamber is involved, whether or not the community is involved, is all up to the school board," Davis says. "That's an open question, and we're curious to find out what the process will be."

Some school board members have recently stated a desire to tap someone from the local area to replace Easton, foregoing any major statewide or national search for candidates. If that's the case, Lemoine would likely be a leading candidate for the post. While the school board's relationship with Easton turned rocky, Lemoine has remained popular with a majority of its members. Throughout a lengthy dispute with Easton over grants administrator Amy Trahan, several board members favored putting Lemoine in charge of the district's Title funding ' a job he oversaw prior to Easton's reorganization of staff in 2005.

While he has previously expressed little interest in the superintendent's job, Lemoine indicated just last week that his thinking may have since changed. "I might [apply]," Lemoine told The Independent Weekly. "I'm going to have to certainly sit down and give that some thought and consider it." He'll meet with LaCombe at the beginning of July to discuss the board's plans for moving forward on an interim basis and beyond. "I'd like to know exactly what [the board] would like to do," he says. "Then I'll make a final decision at that point."

In addition to Lemoine, another potential local candidate whose name is being bandied about is Don Aguillard, superintendent of the St. Mary Parish School System for the past three years. Prior to that, Aguillard served as an area director with the LPSS and is a former principal of Carencro High School.

Easton, meanwhile, might accomplish the feat of collecting severance pay and landing a new job; he's applying for the superintendent's vacancy in St. Landry Parish. "I would like to try and serve as a superintendent one more time," he says. "I like Acadiana; make no mistake about it. If they're interested, I would like to try and make a contribution there." The St. Landry Parish School System is looking to replace Lanny Moreau, its superintendent of the past seven years. Much like Easton's situation in Lafayette, Moreau left after being at odds with several of his board members. Moreau opted to retire on May 31 with six months still remaining on his contract, pre-empting any move by the board to oust him.

Several of the issues between Moreau and the board involved disputes over the school system's 42-year-old desegregation case ' a matter likely to be a priority for its next superintendent. Easton already has experience in that regard. During his tenure as superintendent here, LPSS achieved unitary status in its desegregation case after four decades of federal oversight.