Environmentalists and oil companies square off over the rapid development of Liquefied Natural Gas terminals. 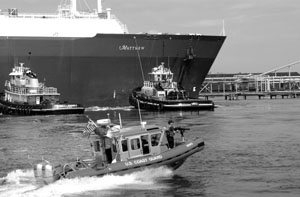 Local fisheries and environmental groups are struggling to catch up in the energy industry's race to construct a slew of new terminals off Louisiana's coast for importing Liquefied Natural Gas.

On Feb. 23, the U.S. Coast Guard and Maritime Administration issued a permit for the Shell Gas & Power LLC Gulf Landing terminal, to be located 38 miles off the coast of Cameron Parish. Organizations including the Louisiana Shrimp Association, the Louisiana Charter Boat Association and the Sierra Club are now lining up in opposition to Shell's recently permitted LNG terminal, which they say could wreak havoc on the Gulf's fisheries. State officials now say they are working with Shell to better determine the full impact of the terminal while the Sierra Club is considering filing a lawsuit to halt the project.

"All of this is happening too fast," says Sierra Delta Chapter Vice Chairwoman Leslie March. "There really hasn't been enough time to do a good study on this."

Even pro-business advocate Gov. Kathleen Blanco is asking for more information on the potential long-term ecological damage from LNG terminals, as many questions remain on how to measure the compound environmental effect of a series of offshore LNG terminals.

Four LNG facilities exist in the United States, including Trunkline LNG in Lake Charles. All of those sites are permitted as "closed loop" systems, which continuously recycle an enclosed pool of water. But Shell's new terminal is permitted as an "open rack vaporization" or open loop system ' and that decision is drawing the wrath of more than a dozen civic and business organizations from the League of Women Voters of St. Tammany to the United Commercial Fisherman's Association.

Terminals using ORV suck in up to 200 million gallons of sea water a day (along with its living inhabitants) through a radiator-like structure and run it over panels with a temperature of minus 260 degrees Fahrenheit. The terminal then discharges the water ' now chlorinated and about 20 degrees cooler ' back into the sea.

"You're subjecting everything that's in that water to cold shock," says Jin Hanifen, assistant administrator for marine fisheries at the state Department of Wildlife and Fisheries.

Only one other similar terminal exists in the world ' off the coast of Japan. But the effect of placing an ORV terminal there in an open ocean setting likely pales in comparison to the impact of an LNG terminal in the Gulf of Mexico adjacent some of the world's most productive estuaries.

Susan Mopper, director of UL Lafayette Center for Ecology and Environmental Technology, says even one such LNG terminal could have a noticeable impact on the Gulf's fish and crustacean populations. Not only would the terminal pose a threat to the eggs and delicately drifting larvae that represent the area's next generation of fish, but it would also take in the tiny plankton that forms the base of the Gulf's food chain. Mopper shudders when she considers the effect of a whole fleet of open water LNG terminals.

"It's just going to sterilize everything, and that's the worst thing that can happen in the Gulf," she says. "It's similar in concept to the dead zone. It could create its own miniature dead zone."

The dead zone is a vast expanse of sea nearly the size of Louisiana, devoid of the Gulf of Mexico's usual bounty of fish and shrimp. It's barren due to a lack of oxygen that scientists say stems from the pollution and excess nutrients channeled into the Gulf through the Mississippi River.

"We're already seeing sharp declines in fish diversity and crustacean diversity so we really need to become more protective," Mopper says. "It seems like the damage could be even more than what current estimates are. I don't think you can really estimate it right now. That's the problem. People are really scrambling to get hard numbers."

The only estimates available come from the Coast Guard, which commissioned an Environmental Impact Study during the Gulf Landing permitting process that is required for the federal permit. The EIS only examined the effect the terminal would have on four fish populations, focusing on redfish. In December, the EIS estimated that that up to 8.5 percent of the redfish at Gulf of Mexico landings and 11.5 percent at Louisiana coast landings would be annually impacted by an ORV terminal. Two months later, after the time frame for state and public comment on the permitting had expired, the EIS substantially lowered its initial estimates, saying that a maximum of 3.8 percent of the redfish eggs and larvae could be killed annually by the terminal's LNG processing.

Gulf fishery observers are concerned over the wide disparity between the initial and final estimates ' and also maintain that the lower 3.8 percent number would still be devastating to the already low redfish count. (Commercial fishing of redfish has been banned since 1988 in an effort to rebuild stock of the overfished species.)

"We don't know enough to be able to fully evaluate the potential impacts of the open loop system," says Jim Hanifen. "Ideally we should have more information, especially if there is going to be more projects like this. There were other data sets that could have been used that could have given some better indications."

Five other LNG terminals slated for Louisiana have already received Coast Guard approval, two of which are offshore. One of these, Energy Bridge, slated for completion later this year by Excelerate Energy in Houston, is not expected to use an ORV system. The other, ChevronTexaco's Pelican Point, was put on hold last week. The Federal Energy Regulatory Commission lists another five proposed sites for terminals on or off Louisiana's coast yet to be permitted, with a total of 11 proposed for the Gulf of Mexico.

Environmental and fishery protection groups have been caught off guard by LNG's rapid development. Daryl Malek-Wiley of the Sierra Club Delta Chapter says the problem started when a number of LNG facilities applied for permits off the coast of Texas and Louisiana before the environmental community was aware of them. "We're all playing catch up," he says.

Even the LNG terminals' corporate owners are scrambling to keep up with LNG's rapid development. LNG is currently exported from countries in Africa or the Middle East, and liquefaction involves cooling gas to minus 216 degrees Fahrenheit and reducing it to a fraction of its size for economical shipping. David Dismukes, associate director of the LSU Center for Energy Studies, says liquefaction facilities exporting LNG are operating at about full capacity. Any new terminals here will require additional investment in countries such as Algeria and Iraq that have an abundance of natural gas.

"In addition to the $600 to $800 million of investment we see here [in Louisiana], there's probably about double that on the front end," Dismukes says.

The lack of infrastructure on the supply side is what caused ChevronTexaco to suspend work last week on its offshore terminal at Pelican Point ' the first offshore Louisiana LNG facility to obtain a permit. "We're just trying to keep pace with our suppliers and make sure there's alignment," says company spokesman Matt Carmichael. He acknowledges the company is aware of the growing opposition to offshore ORV terminals but adds that Chevron, like Shell, has agreed to extensive monitoring for any project that goes on line.

"We have all our permits," he says. "We're going to move forward as the project dictates."

While Chevron's project is on hold, Shell has a number of working investments overseas that should be able to supply its Gulf Landing terminal for its planned opening by 2009. (Shell did not respond to interview requests for this story by press time.) The company's Web site says LNG facilities will help the country to stabilize rising natural gas prices, predicting domestic demand for natural gas to increase by more than 50 percent by 2020.

Dismukes helped conduct a study for LSU clearly outlining why Louisiana ' with its extensive pipeline infrastructure and a high natural gas demand for its chemical industry ' is such a perfect match for LNG. (Louisiana uses almost as much natural gas as the entire country of China.) The report estimates that construction of the proposed offshore facilities and added pipelines alone could mean $1.4 billion to the state, with annual operations generating around $141 million.

Dismukes says the opportunities have not only attracted multinational companies with their own direct links to liquefaction facilities but also local ventures that are moving ahead without any suppliers ' confident they will be able to operate in merchant fashion.

"There is some urgency," Dismukes says. "As more and more of these LNG facilities come on line, they're going to start to have a dampening effect on prices. So that last one to go up is probably going to be the least profitable." For that reason, oil and gas industry executives predict that only a few of the proposed LNG terminals will actually get built.

Dismukes says the current market allows for LNG facilities (such as the one in Lake Charles) to buy imported LNG at about $3.50 per 1,000 cubic feet and sell the same amount at the Henry Hub for about $6, almost doubling their money.

But the profit margins are the only hard numbers associated with LNG terminals. The Sierra Club's Malek-Wiley warns the state has been burned before by not fully examining environmental consequences. "Louisiana has an experience with what the energy industry can do to our coast," he says. "We're now dealing with billions of dollars in damage to our eroded coastlines," he says, blaming oil industry canals for a significant part of the state's coastal erosion problem. "Now we're going to put in these LNG facilities that could cost billions to our fishermen. We should get smarter."

State officials are now left in the awkward position of trying to ensure that LNG facilities already permitted will work with them to find a solution.

In a recent letter to the U.S.'s Maritime Administration, Gov. Blanco writes that while the state is excited about LNG development in Louisiana, concerns over the impacts on fisheries call for "a comprehensive monitoring and mitigation plan." She also says that should the possible economic benefits from such a facility be outweighed by the long-term harm to the environment and fisheries resources, "then the risk would be unacceptable."

But what will be deemed an acceptable compromise between the two interests is still up in the air. "Everything has a trade-off," says state Wildlife and Fisheries administrator Hanifen. "We want to make sure that balance is in the right place, and I can't say exactly where that's going to be."