The Lafayette Airport Commission is embroiled in a bitter dispute over a contract for a private terminal facility. 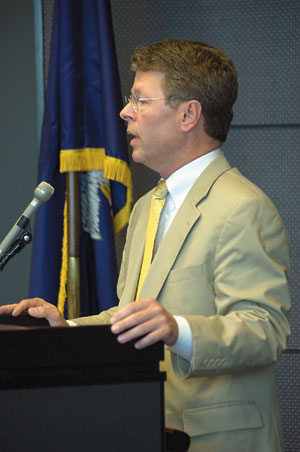 Amid allegations of a tainted process for proposals involving a private aviation facility at Lafayette Regional Airport, the Lafayette Airport Commission ignored a local group's pleas to start the RFP over, voting instead to negotiate a lease agreement with Million Air's Cincinnati franchisee.

The allegations, made by Lafayette attorney Steve Oats, were met without a single denial of the charge during the airport commission's regular meeting on Thursday, June 1.

Oats, who represents prominent local businessmen unsuccessful in their pitch, claimed Million Air unfairly amended its original two-page proposal to construct a fixed base operation at the local airport. He says Million Air's initial proposal failed to include requested details, and the company was allowed to resubmit it on April 1, 2005, two days after the deadline.

"In the delay between the deadline and the Million Air proposal, Million Air gets a phone call from the [airport] staff, and that generates a new proposal the next day," Oats told the commission. The April 1 proposal was eight pages long and is filled with financial and construction specifics of a proposed $6 million capital investment.

In a cover letter on his new proposal, Million Air franchisee Kenneth L. Allison wrote: "â?¦after further assessment, we have concluded that perhaps our initial proposal was too general in natureâ?¦ we have determined perhaps it would be better if we offered a more specific proposal under certain assumptions."

Unlike the public terminals for commercial airliners, fixed base operations, commonly called FBOs, serve private aviation interests. FBOs typically include hangars and a terminal with a waiting/lounge area, meeting rooms and offices. They provide a variety of services and fuel.

Neither submitted proposals to continue on after their leases expire in late 2007, but Richard Fournet, son of respected Lafayette aviation pioneer Paul Fournet, was slated to be hired by media executive Wayne Elmore's group, the commission's third choice. Because of the poor track record of Fournet's FBO, his association with Elmore's group hurt its FBO bid, says Airport Commission Chairman Jim Nunn.

Elmore's group planned to construct a $2 million terminal and also listed specific rents it would pay to take over both existing FBO facilities. The second place finisher, American Airports Corp. of California, has since come under investigation by the Federal Aviation Administration for alleged rent and fuel violations at county-owned airports.

It is unclear at this point just how much Million Air will spend because the facilities will be constructed in phases as lease space becomes available, another point of contention among new potential investors in Elmore's group who attended Thursday's meeting. "There is a lot of gray area," said Lafayette jewelry magnate Matt Stuller, maintaining that Million Air appears to have backed away from its specific financial investment assurances. "And you are ultimately going to be the owner of this facility at the end of this lease."

"To throw local people out on a rotten process, when you're trying to get local people to fly Lafayette, is wrong," Oats says.

Lafayette Regional's director, Greg Roberts, did not deny that any information he shared with Million Air may have led to the supplemental submission. "It was an open process," he said after the meeting, explaining that collecting the proposals differs greatly from a formal bid process, which is not required by law for airport FBOs. Roberts, however, did refute the allegation that he or anyone on his staff shared information about other proposals to the benefit of Million Air.

"Perception is reality in many cases, particularly in the scrutiny of the public," Stuller said.

Fournet and Lafayette Aero are both in deplorable condition, according to October 2005 facility inspection reports obtained by The Independent Weekly. Fournet was cited for extensive rust throughout its facilities; broken windows; holes in stucco and brick masonry walls; dirty and missing carpet; and filthy vinyl tile in the bathrooms. Lafayette Aero's report was similarly disturbing.

Also at last week's meeting, Lafayette Aero asked that its lease be terminated early, which the commission granted, opening the door for Million Air to quickly take over that facility. The new 30-year lease agreement should be signed within a month, and Nunn maintains the 10,000-square-foot terminal will be similar to the one Million Air is constructing to replace its hurricane-damaged facility at New Orleans' Lakefront Airport.

Citing numerous violations of the maintenance and capital improvement provisions in Fournet's lease agreement, the commission is also seeking to end the 50-year-plus lease early, which would free up additional space for Million Air. Nunn says Fournet has had opportunities to address the problems but ignored them; the airport is pursuing an eviction.

The airport commission is not privy to Fournet's financial data, but Roberts said a well-run FBO here could generate a half million in revenues after expenses.

In another strange twist, Herb Schilling of Schilling Distributing says he was recently encouraged by FBO committee chairs Brenda Burley and Dr. Chuck Wyatt to pursue the FBO opportunity. Schilling and Keith Mosing of Frank's International in Houston have a mutual interest in providing an air shuttle service from Lafayette to the Houston area ("Flight Plan," May 24) but want a first-class FBO to do it. Only recently learning of the FBO bidding, Schilling says he called Burley, Wyatt and Nunn to talk about the shuttle service and the benefits of local FBO ownership and claims they encouraged him to move forward with a proposal.

"Wyatt told me that the Million Air deal was over, as they had come back to the table to revise the contract too many times," says Schilling, who claims that prompted him to hook up with Elmore's group. Schilling is part of the investment team that includes Rodney Savoy, Mike Poole, Kenny Hix, Oats, Stuller and Mosing. "We were going to give any major tenant of the airport that owned hangars the opportunity to partner with us," Schilling notes.

Wyatt, however, denied after the June 1 meeting that he ever led Schilling to believe he had a shot at securing an FBO lease agreement, saying he only had one brief phone conversation with the businessman.

Schilling now insists he was used as a pawn. "They used us to close the deal with Million Air," he says. "At no time did any of the commissioners I had contacted say we were wasting our time [nor did they] discourage us from pursuing the FBO. In my opinion we moved pretty fast in a six-week period."

Nunn says the new Schilling-Elmore group simply came to the table too late. "The fixed base operator discussions now being promoted by a few prominent local businessmen comes over a year after the deadline for submission of proposals to the Lafayette Airport Commission," Nunn wrote in a June 30 memo two days before the meeting. Nunn won't set aside a process he says included public notice of the intent to solicit proposals, acceptance and review of the proposals, a vote of the commission and a year of negotiations. "We do not question the motives of those who would like to become involved, but we do have issues with their timing."

Nunn, who has only been on the commission for 10 months, was not part of the selection process for Million Air but says the Elmore group's decision to team up with fixed base operator Richard Fournet "absolutely" hurt its position with the commission.

The one question no one can answer fully is why the FBOs were allowed to deteriorate to such an extent. "One of the greatest embarrassments we have had at the airport was that the president of the United States could not use either of Lafayette's FBO facilities," Nunn says. In March 2001, President George Bush had to use Matt Stuller's hangar facility as a command post for the Secret Service and Air Force One team when he came to Lafayette.

Ironically, Elmore group attorney Oats chaired a previous FBO committee and served on the Airport Commission from 1998-2002, and Roberts claims he and past commissioners were not aware of the extent of the problems at the facilities until the inspection in late 2005 ' even though past inspections were conducted. Roberts now says the problems have likely persisted for more than a decade.

Nunn has little doubt the facilities have tarnished Lafayette's image in the eyes of business people coming to Lafayette. "We have tried to keep Fournet's name out of the mud out of deference to Paul Fournet," Nunn said. "[But] it's insanity to allow [those conditions] to go on."

Not everyone, however, favored protecting the Fournet name at the cost of damaging the airport's ' and the community's ' reputation. Those on both sides of this controversy say that former FBO committee chair George Armbruster III first set the wheels in motion to address the issue and see to it that the community has a top-notch welcome mat. Armbruster resigned in mid-2005 due to the demands of his law practice.

Now Lafayette has to wait and see whether it gets what Armbruster thought it deserved.