The Lafayette Economic Performance Index continues to paint a picture of a community that is thriving while many others are navigating an array of economic pitfalls. You'll be hard pressed to find a community that has seen the same level of success and accolades as Lafayette has in recent years. Third quarter numbers reiterate what I wrote in last month's "Off the Charts" column - Lafayette and Acadiana are the greener pasture. My goal is for the EPI to provide you, our community and business leaders, with a story you can easily retell about the local economy and the information you need to make informed decisions for your business, your employees and your community.

Like any index, the Lafayette EPI combines multiple data points and creates a single score that can be compared independently over time. This particular index tracks 15 individual local statistics, comprised of 15,000 data points, but together they work to tell a story about how Lafayette's economy is performing. Because inflation and seasonality are removed, any movement in the index is strictly due to changes in the economy, allowing the index to be comparable over time.

In September, the Index totaled 120.79, up 9.05 points over the third quarter 2011. Illustrated in Figure 1, the Index has continued the upward trend that started at the beginning of 2012. Other than a slight dip in August 2011, the Index has beaten the 12-month moving average for 19 of the past 20 months (since February 2011). If the Index is consistently above or below this average, it is a signal that the economy is headed in a particular direction. When the Index is steadily above the 12-month moving average, as it is now, it signals an upward turn in the economy.

Generally speaking, Lafayette's economy has been on the uptick for the past three years. Since December 2011, the Index has increased 8 percent. This supports the IHS Global study, released in July, that ranked Lafayette as one of the "fastest growing metros" in the nation - projecting Lafayette to have the highest growth in employment (8.8 percent) and the second highest gross metropolitan product growth (7.5 percent) of 363 metro areas.

Upon closer inspection, the leading, current and lagging indicators as a whole are performing well. When all three categories of indicators move in the same direction, it means the local economy is on track for continued growth and prosperity. In September, all six of the leading indicators performed better than in August and only Louisiana and Gulf of Mexico Drilling Permits are slightly lower compared to the third quarter of 2011.

Leading indicators are those that change three to six months prior to the overall economy showing signs of adjustment. The Lafayette 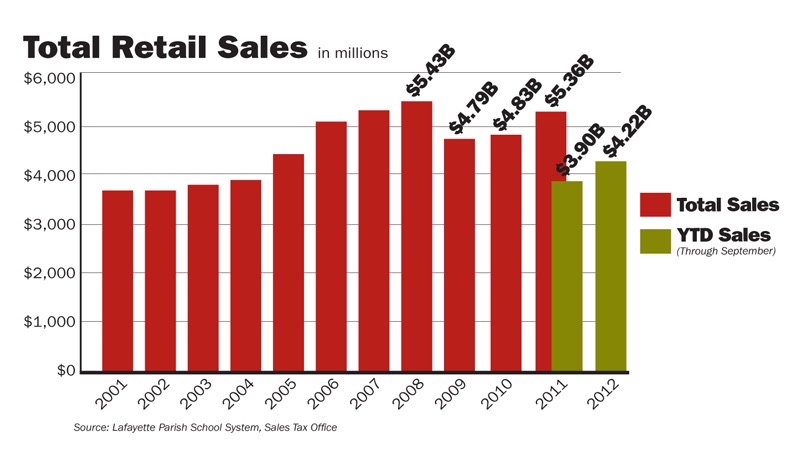 Louisiana Average Manufacturing Weekly Hours has risen to 44.4 hours worked a week - an increase of 6.7 percent since last year. The increase indicates a rise in demand for production, and if sustained, businesses will need to hire more workers.

The Lafayette Stock Index is currently at 236.35 and has increased every month since the third quarter setback in August 2011. The index is up 29.9 percent from September 2011, supporting the theory that the third quarter decrease, caused by Standard & Poor's downgrade of the U.S. credit rating and the European debt crisis, were only temporary.

Residential building permits in Lafayette city limits and in the unincorporated areas of Lafayette continue to perform moderately. Much of the residential growth in the parish has been attributed to home construction in neighboring municipalities, which are not reflected in the Index. The middling performance of residential permits is not surprising given the slow recovery of the national housing market, but local conditions are showing signs of improvement due to the vitality of the overall local economy.

In September, 132 drilling permits were approved in the Gulf of Mexico - far more than the 75 permits issued during the same period in 2011. Despite some month-to-month volatility, Louisiana drilling permits have ended the past three quarters above the 12-month moving average signaling sustained improvement.

Current indicators - those that change at the same time that the overall economy shows signs of adjustment - continue to show strength in the third quarter. Once again, Non-Farm Employment in the Lafayette MSA (Lafayette and St. Martin parishes) is among the strongest indicators. Since September 2011, the local workforce has added 15,300 jobs; this growth has not gone unnoticed. Forbes ranked Lafayette as the No. 1 mid-sized city for jobs and fourth among all cities - citing one- to 10-year job growth and the region's momentum as factors. Area businesses have consistently added jobs since the beginning of 2010, even as other areas of the country have struggled to maintain jobs. As long as the indicators continue to improve, look for the local businesses to continue adding jobs.

Retail Sales is one of the top economic indicators because it is an indication of consumer spending and confidence. September saw more than $450 million in sales, and for the year, Lafayette retailers have reached $4.2 billion in sales. This is an 8.2 percent increase over 2011. Although retail sales dropped below the 12-month moving average in August and September, they are still projected to reach the $5.9 billion mark, beating the all-time high of $5.4 billion set in 2008.

In the past few months the lagging indicators - those changing three to six months after the overall economy adjusts - have begun to align themselves with leading and current indicators. Lafayette's seasonally adjusted unemployment rate is 3.9 percent, the lowest in the state for the third quarter in a row. The Unemployment Rate was one of the last indicators to recover after the recession.
In addition to the positive employment indicators, the number of bankruptcies in the Western District of Louisiana has continued to improve. Following a downward trend, bankruptcies have decreased 19.2 percent since last September and are down 35 percent from their high in September 2009.

Louisiana Rig Counts are the only lagging indicator that has not shown considerable improvement in the past two years. There were 121 rigs on and offshore this September, down from 152 last September. While the decline in the summer and fall of 2010 can be attributed to the BP oil spill and drilling moratorium, the continuing decline is the result of falling natural gas prices. Rapid drilling programs and enhanced recovery techniques resulted in an increase to the natural gas supply that was not met with an equal amount of demand, causing gas prices to drop to nearly $2/MMBtu. Prices have recovered to around $3.75/MMBtu as companies have taken it upon themselves to cut back in fields yielding the least returns. In September, the offshore rig count climbed to 49, up from the low of 14 in 2010. Though offshore and North Louisiana rig counts are sending mixed signals, the offshore rig counts are optimistic. Due to record highs in the price per barrel of crude oil, companies have reported record earnings.

How is the local economy? In a word - vibrant.

Gregg Gothreaux is president and CEO of the Lafayette Economic Development Authority. Lafayette Parish's EPI is published in ABiz each quarter and presently annually at the publication's "State of the Economy" luncheon. The 2013 event is May 9 at the Cajundome Convention Center.