Up almost 5 percent over last year, retail sales continue to outperform every other barometer.

Since 2012, LEDA has been sharing its quarterly Economic Performance Index score (see the October issue of ABiz for the most recent EPI). Even before we launched the EPI, LEDA collected hundreds of data points on a monthly, quarterly, semi-annual and annual basis. We used those tracking points, plus anecdotal information gathered from our Business Visitation Program, to tell Lafayette's story to businesses or individuals seeking to become a part of our community. Today those individual indicators - retail sales, unemployment rate, cost of living, per capita income, etc.- are still some of the most requested data from LEDA.

This month, we'll take a closer look at the top performing economic indicator for the past couple of years - total retail sales.

Retail sales say a lot about the condition of the market. Historically, retail sales are about 40 percent of Personal Consumption Expenditures, which in turn make up two-thirds of the Gross Domestic Product. That means retail sales account for just more than one quarter of the GDP, and the retail industry is a reflection of the current conditions of the overall economy.

Retail sales are an excellent gauge when considering consumer confidence and attitude. A rise in retail sales receipts is usually the result of an increase in effective buying income as people join or improve their position in the workplace. A decrease in retail sales could mean a lack of confidence in the economic climate or a loss of disposable income.

Consumers can alter their spending habits immediately depending on their current employment status and income or based on concerns about the economy. If consumers are worried about being laid off or a decrease in their income, they will cut back on spending.

Conversely, if they get a raise or have some extra spending money, they will spend more. 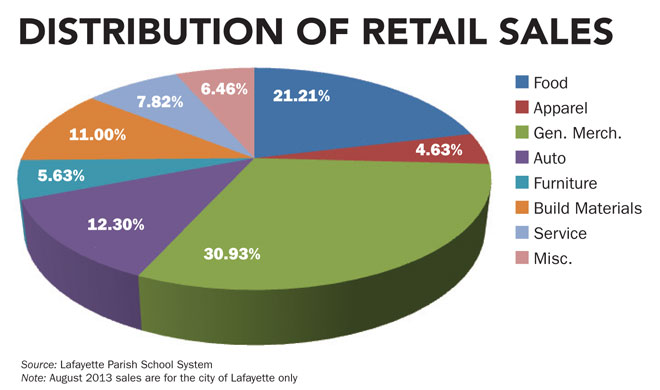 In Lafayette Parish, we saw double digit gains in retail sales between 2005 and 2008; however, sales dropped by 11 percent in 2009 as the national recession began to impact this area. In 2010 sales rebounded; and in 2012, sales came close to hitting the $6 billion mark - reaching the all-time high of $5.7 billion. With almost $4 billion in sales recorded through August, we continue to outpace 2012's record-setting numbers by almost 5 percent. First quarter sales were the highest on record, and August sales were the highest August on record.

With a strong holiday shopping season, we should see increased retail sales through the end of the year. LEDA's forecasting model indicates that 2013 will be another record-breaking year for retail sales.

Other retail indicators are also very strong. The buying power index is a measure of the ability of retail customers to buy retail goods - the higher the index, the greater the ability to buy goods and support retail activity in the region. The index is a weighted score taking into account local population, retail sales, and per capita income in relation to state averages or totals. Lafayette's buying power index is .64, the highest in the state, which surpasses the Louisiana average of .45.

Lafayette Parish also has one of the highest customer surplus ratings in the state at 143,000. The customer surplus rating measures the "push" or "pull" of customers based on retail sales. If retail sales are higher on a per capita basis, as they are in Lafayette, it means the parish is pulling in additional customers from outside the parish. This pull of customers also impacts the percent of income spent on retail. The average American spends 36 percent of his income on retail goods and services. In Lafayette that number is 62 percent. In Acadiana, it's 48 percent. That doesn't mean we spend more than average; rather, that extra 26 percent means we are a net importer of retail sales.

When looking at the distribution of sales, all categories show increases over or are holding steady with 2012 numbers. The miscellaneous category (which includes manufacturers, utilities and retail such as florists, bookstores and music stores) is the best performing category with an increase of 15.3 percent in sales compared to 2012. In an economic downtown, big ticket items such as cars and furniture are often the first purchases to be delayed. The auto and furniture categories have the second and third largest growth compared to 2012 (10.0 percent and 7.0 percent, respectively), further demonstrating the confidence of local consumers.

Final numbers for 2013 will not be reported until February, but the numbers through August have painted a good picture of Lafayette's overall economy, and things seem on track to remain the same after the new year begins.

At LEDA we're constantly evaluating the economy, reviewing statistics as they are received at various points in the year. As we move into 2014, we hope to continue informing ABiz readers on the individual indicators that make up the Economic Performance Index. While not all of them are as exciting as total retail sales, each one measures a vital component of Lafayette's economy. As our market continues to evolve we'll bring to the forefront those figures that help to tell the whole story of Lafayette and Acadiana.

We rely heavily on input from community and business leaders to help us complete the picture, so please take the opportunity to educate us on how to gauge success in your industries. For access to statistics that the LEDA staff maintains, please visit our website at www.lafayette.org.