The local banking industry says it can weather the biggest crude price drop in years — at least for now.

The sudden drop in oil prices over the past month — the biggest in five years — translates into good news for motorists; not so much for America’s banking industry.

For banks, the immediate result of the price slide — West Texas Intermediate went from a year high of $107 a barrel in June to the mid-$60 range by late November — has been a decrease in stock prices, especially for those institutions with a high percentage of loans tied to oil and gas service companies. That’s been the case for MidSouth Bank and Iberia- Bank, both based out of Lafayette.

According to MidSouth President and CEO Rusty Cloutier, the drop in oil prices has caused his bank’s share price to go from about $19 to $16.45. It’s climbed a little since, hovering at about $17.35 when this story was finalized Dec. 9.

“No drop feels good,” Cloutier tells ABiz. “But we still feel good about the future.”

For the most part, Cloutier says he’s not too concerned about the drop, adding that he’s been through this before.

“It’s dropped four or five times since I’ve been in the business,” he says.

“There’s some concern for some of the people who work for oil companies. I’ve seen them cutting back some hours, but overall the oil and gas companies are very much in a good position. They understand the rise and fall of oil prices. And from a banking perspective, we’re not panicking. Sure, we got beat up some on the market. There was a lot of panic there. But all of the stocks got beat up — anyone close to Louisiana or Texas. That’s what we’ve seen, and we don’t have a problem with that. We still feel our stocks are reasonably priced, and they’ll eventually rebound once oil prices go back up.”

Like Cloutier, IberiaBank President and CEO Daryl Byrd is also maintaining an upbeat view of the recent decline, telling investors that as of Oct. 31, only $36,410 of the bank’s energy loans were past due. That’s about 0.004 percent of the bank’s total outstanding energy loans.

“We recognize that the dramatic fluctuation in energy prices over the last several years, combined with limited data regarding the banking industry’s energy lending practices, has created a challenging environment in which to evaluate and differentiate investment decisions,” says Byrd.

“Over half of our energy loans outstanding and energy commitments are in the exploration and production segment, a business we know very well. Our experience and historical data have shown that segment to be a very solid performing form of cash flow lending throughout the volatility of economic and commodity price cycles.”

That sentiment was also expressed by Bob Taylor, president and CEO of the Louisiana Bankers Association, who tells ABiz that based on his conversations with a number of bankers throughout the state, no one is hitting the panic button.

“What they’re telling me so far is they’re just being more cautious,” says Taylor. “There’s been no radical changes to what they’re doing and no big changes in the way they’re conducting their lending practices.”

Yet, some predictions aren’t so positive. According to a recent report by Michael Specter of The New Yorker, some economists are predicting oil will continue to drop to as low as $50 per barrel in the foreseeable future. And, from a recent report by The New York Times: “One of the big open questions is just how many of the small, independent producers in the American heartland have cost structures that make them viable with oil prices in the $60s rather than the $100s. Many have relied on borrowed money, and bankruptcies are possible.”

But for noted LSU economist Loren Scott, the price drop is not enough cause for changing his annual Louisiana Economic Forecast, which he delivered at ABiz’s Entrée to Business event in October, showing “respectable” growth in 2015 and 2016 for the Lafayette region. “For you guys in Lafayette, where business is really dominated by offshore servicing, I don’t see it being a problem yet,” Scott tells ABiz in a subsequent phone interview in early December. “Offshore plays have a 10-year planning horizon, which gives economists a really tough time in finding a correlation between oil prices and the effect on offshore plays. They can still make it at $30 a barrel in the Gulf, and we’re still at $60, so there’s still a lot of money to be made.”

Scott says one area likely to be affected by the low prices is the Tuscaloosa Marine Shale in Louisiana. But that, maintains the economist, is largely due to the difficulty in fracking at the site — a result of the clay-based soil of the area that’s a costly headache for operators. Scott says the Tuscaloosa Shale play will be impacted first, but adds that may be the extent of the impact caused by the recent price drop. Oil prices need to be at $90 per barrel for operators at the Tuscaloosa site to just break even, making it easily the most expensive shale play in the country.

“The good news,” says Scott, “is there’s not many rigs operating in this play because it’s still in its infancy. My guess is there’s about 30 rigs there compared to 500 or so up in North Dakota. The Tuscaloosa Shale is really where I see the biggest problem.”

So far, Scott says unless the price of oil keeps dropping, drastically, he isn’t planning on altering his annual economic forecast.

“We’ll have to see how far it goes down and how long it stays there,” he says. “Those are two pretty big unknowns, and the price of oil is one of the toughest things for an economist to forecast.

There’s just a lot of waiting and seeing with what’s going on right now.”

Scott, unlike some of his colleagues who analyze the economy day in and day out, theorizes that the price drop will likely be short-lived.

“Anytime I see the price fall suddenly like this, I always look to the Saudis,” he explains. “Some people say it’s because of the large increase in U.S. production. Well, that’s been growing since 2008, so why did it drop so fast? That’s a very sharp drop. I think the Saudis saw the U.S. production rising so fast — between 2008 and 2013, our production is up 70 percent — and they saw our Department of Commerce was starting to allow certain types of oil to be exported. I think the Saudis saw that and thought it’s not only eating into their market share in the U.S., but it’s also eating into their market share worldwide.” Scott may be on to something: The price drop immediately came on the heels of an announcement from OPEC — for which Saudi Arabia is a member country — that it would continue with current production levels.

But here’s the thing, according to Scott: OPEC’s decision won’t hold for long.

“Saudi Arabia is one of the few countries in OPEC with the ability to increase production on a dime to balance out the lower price they’re getting per barrel,” the Louisiana economist says. “The tricky thing for them is that the other 11 members of OPEC can’t do that. They can’t increase production, so they’re stuck with lower amounts of money coming into their governments. We’re seeing that in Venezuela right now, and it’s resulting in civil unrest there.”

Based on Scott’s theory, there will soon be a turning point for the other 11 countries of OPEC because of the lower prices.

“These drops are always short-lived,” he explains, “because the other 11 members of OPEC are going to call a meeting and say, ‘Let’s stop this because it’s killing us.’ And it’ll be interesting to see how long the Saudis can continue to do this without causing OPEC to collapse.” 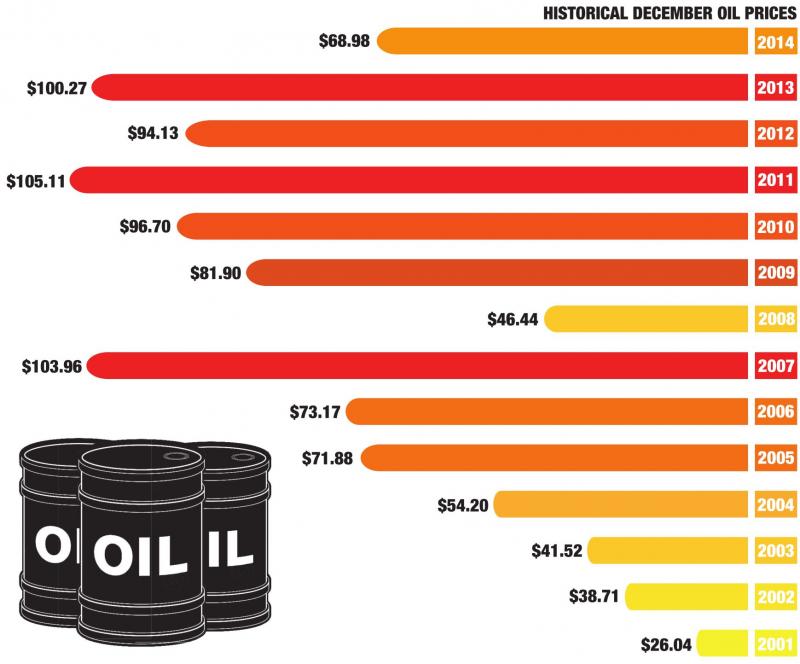