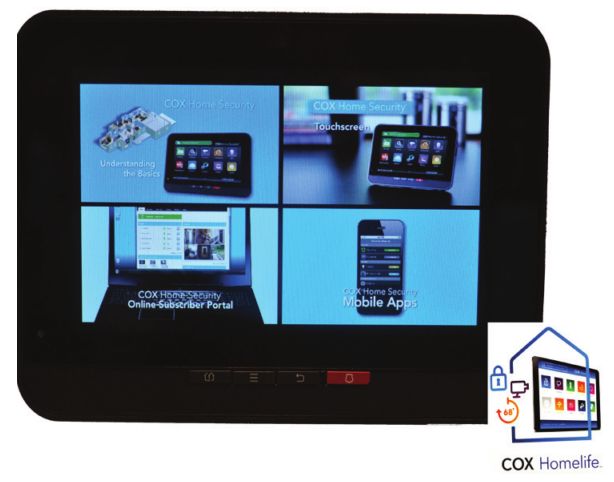 It’s been more than a decade since Cox Communications launched a new business unit, but now it’s adding a fourth offering to its triple play suite of services with the start of Cox Homelife, a home security and automation system with a wide range of security and advanced, smart home features.

“Homelife is something we’re very excited about here at Cox,” says Patricia Thompson, the public affairs manager for Cox Communications Southeast. “We’re calling it a next generation system because it goes beyond the traditional security system that simply dials a monitoring service via a phone line; this is actually built around wireless technology.”

Homelife uses all-wireless sensors that communicate with a central monitoring station in the form of a sleek touchscreen rather than a clunky push button keypad. The touchscreen serves as the hub of the entire system and utilizes a broadband connection with built-in cellular wireless technology, so would-be burglars and criminals can’t take down a home’s entire security system by simply cutting the phone line.

“Even if someone has their power go out or the Internet is down, Cox Homelife still works because it’s protected by a battery backup and the free cellular connection,” says Thompson.

In addition to traditional home safety monitoring, Homelife offers instant notification of fire, gas and flood detection along with both interior and exterior cameras and motion sensors that are all accessible remotely through a desktop computer or smartphone app. The system’s remote monitoring features also include email and text alerts to notify customers of occurrences in their homes.

“One of our biggest advantages is the fact that folks already trust Cox to provide phone, Internet and cable services in their home, and it’s our same local team of trained technicians who have been trained now on Cox Homelife to handle all installation and maintenance,” notes Thompson.

Homelife officially rolled out in December, and local nurse Katie Fontenot was among the first customers to have the system installed in her home.

“It’s really tech savvy, and you can use it from your phone, which is awesome,” says Fontenot. “It works with our mobile devices, which makes it convenient. It’s easy to use. It comes with a lot of options and it’s customized to what you prefer.”

Existing Cox customers also have the option to bundle Homelife with their cable, phone and Internet for a discounted price.

“We like to say that we pioneered the bundle, and now we’re sort of re-inventing it,” says Thompson.