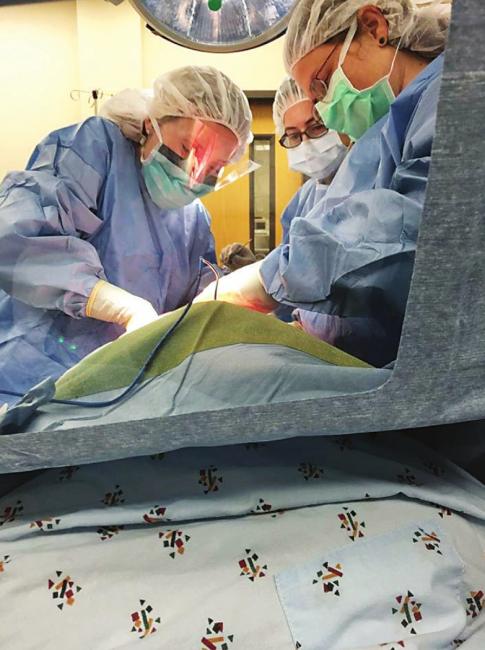 Chrissy Thompson was pregnant with baby number three earlier this year when the idea came — I want to see my baby born. The issue: She was having a cesarean section.

Thompson is not alone. The term “gentle C-section” or “familycentered C-section” is a movement toward a new approach to the surgery that makes modifications to make mother and baby feel more connected during the procedure. And at LGMC, one small change could mean a big step for some mothers toward feeling more connected to birth in C-sections. It’s as simple as a clear window in the drape that stands between mother and child during C-sections.

“I was hoping maybe they could just drop the drape, and then the day before my OB/GYN appointment an NPR article came out about gentle C-sections or family-centered C-sections, and it’s exactly what we had been talking about,” Thompson says.

Her idea to drop the curtain was shut down immediately because it’s a sterile field. A mirror was one suggestion.

“I don’t want to see my guts,” Thompson says with a laugh. “The doctor said maybe there’s a clear drape option.”

LGMC Director of Community Relations Daryl Cetnar says the clear drapes are not standard procedure at this time, but they could be part of an option for patients in the future.

“It was a special request, and we are looking at the possibility of ordering more to have them available in the future on a per-request basis,” Cetnar says.

"It's one of those moments that stand still in your life."

For Thompson the option gave her the opportunity to feel more connected to the birth of her son — Henry.

“He came out right there in front of my face. It was overwhelming. It was awesome. I was crying. I got to give him a kiss and touch him through the screen,” she says. “It was unbelievable.”

She says the nurses and staff seemed to be impressed with the difference in the birth experience in light of such a small change.

“It’s one of those moments that stand still in your life,” Thompson says. “Everybody was like, ‘Wow, that was really cool,’ and ‘it was wonderful to see your face.’” The doctor afterward squatted down by Thompson to get a view of what her patient had seen.

“She said, ‘We are ordering more,’” Thompson says. “I get policy and procedure, and we get caught up in having to do things a certain way and sometimes the littlest thing can blow people’s minds … all you’re doing is improving the connection, and it’s not drastic to some. But to a mother it is.”