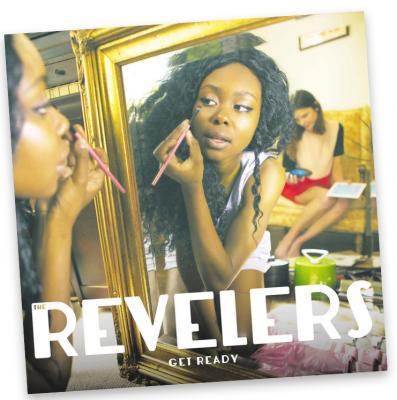 With Get Ready, The Revelers have a chance to make history, not only for the band but for South Louisiana music. The Lafayettebased band could win the Regional Roots Music Album Grammy at the annual awards ceremony on Feb. 15. It would be their first Grammy and keep the state’s dominance in the category going (all four winners have been from here). It also will be the first time a decidedly swamp pop record takes a Grammy of any sort. In fact, it is the first time a swamp pop record has even been nominated in the 58-year history of the awards.

Being that the band pulls members from The Red Stick Ramblers and The Pine Leaf Boys, it is no surprise Get Ready contains Cajun tracks. Overall, however, The Revelers have pulled off an impressive feat of creating new swamp pop that both pays homage to the old style and updates it with a more modern vocal approach via less antiquated lyrics and a rotation of singers who don’t always fit into the genre’s style. The record — down to its last track — is all originals. New swamp pop songs are a rarity, as the genre is typically dominated by covers of tried and true classics. (Likewise, the band released The Revelers Play Swamp Pop Classics, Vol. 1, a collection of four classic covers.) Equally impressive, it’s a shot in the arm for the genre that once lured many a Cajun musician away from French music, but exists now as somewhat of a dead language. Let’s face it, although classics from the genre are still treasured, there isn’t much being done to further it. In other words, when is the last time the words “good,” “new,” and “swamp pop” have been used together?

The album’s four Cajun cuts were written by accordionist Blake Miller and are on-point, staying in the simple poetic style of the genre. What is a surprise is the inclusion of saxophonist Chris Miller’s work on these tracks. Sometimes, the pair fuses its instruments together like the accordion and fiddle style of old. It is likely the only Cajun songs to merge accordion and sax. If there are others, it is hard to believe anyone does it better than The Revelers.

Get Ready’s swamp pop tracks were penned by members Chas Justus, Daniel Coolik, Eric Frey, Glenn Fields and Feufollet’s Kelli Jones-Savoy. Frey, Justus and Fields take turns crooning on a mix of good time and heartbreaking swamp pop songs. These have an excellent quality that doesn’t carbon copy old tunes, yet stays true to its vintage style, while making new grounds. Sure, there are a few familiar vibes, here but this is The Revelers as themselves, not miming already proven material. Chorus and rhythm are keys in any genre — particularly swamp pop — and Get Ready delivers with infectious toe-tappers. Lines like “I can see your town in my rear view mirror” provide slight hints at a more modern writing style.

Aside from the band’s acumen, it helps that it is going up against bands on relatively equal footing — not facing off against Jon Bon Jovi covering the traditional folk songs of his native New Jersey in some ill-conceived side project. The only real obstacle standing in its way is Jon Cleary’s GoGo Juice. Cleary, with 30-plus years in music and a former member of Bonnie Raitt’s band, likely has more name recognition than the far less experienced Revelers, formed at the onset of this decade. Plus, the two Louisiana nominees could split the voting bloc that has etched the name of a Bayou State band onto every statue from this category. That split could mean an outof-state nominee has a better chance of winning. Yet it is unlikely, as more than one Louisiana band has been nominated every year. History also says that location within the state might not play too much into the results — Acadiana and New Orleans have trumped each other on different occasions. Overall, past results do indicate that either Cleary or The Revelers will take the prize.

Along with Get Ready’s solid songs, its album art — images of vinyl records and a play on words where the “get ready” in the picture is a girl doing her make-up — launches the genre into modern hipness. The Revelers did an excellent job on this record and deserve the recognition that comes with a Grammy win. But also, swamp pop — the red-headed step child of South Louisiana music — might finally get its due on a Grammy statue.