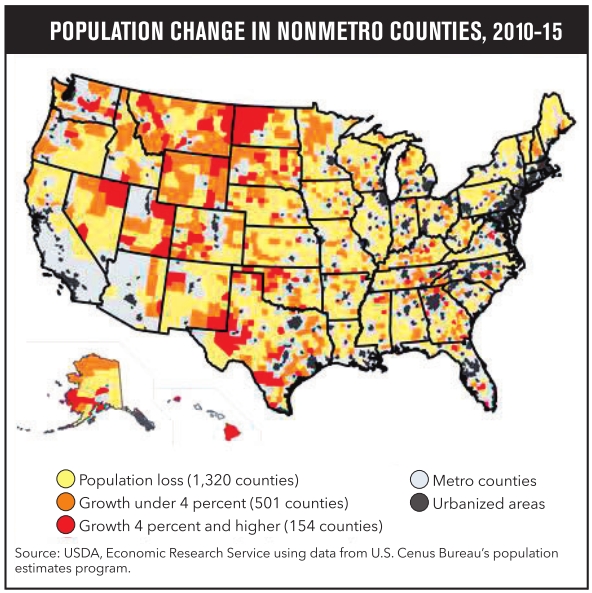 A July article by Aaron Renn in Governing Magazine portrays Donald Trump as an entrepreneur who pursued an opportunity he saw in the political “marketplace.” The opportunity Trump saw was presented by a large group of disaffected voters whose concerns were not being addressed by either party. These voters were low- and middle-income white men and women living in smaller towns and counties away from the urban centers. Many of these “real” Americans were struggling economically, thought that government mostly helped people who didn’t need or deserve it and resented the fact that their struggles were ignored by those vying to lead the country.

While other candidates in the Republican primary focused on familiar themes like reducing the size of government, balancing the budget and ripping Obamacare “out by the roots,” Trump focused like a laser on the specific concerns of this underserved group of voters. Trump attacked “unfair” trade practices and treaties, emphasized the threat posed by undocumented Mexican immigrants (“build the wall”), questioned the intent of Muslim immigrants and derided political correctness in all its forms (feminism, LGBT, Black Lives Matter). Responding to Trump’s message, these voters became supporters and have not wavered, despite their champion’s frequent inanities and routine departures from the truth.

Although the identity of Trump’s supporters has been analyzed in the usual ways — predominantly white, older, less wealthy, less educated — the fact that much of Trump’s support comes from those living outside urban areas has lately gained attention. Analyses of the rural-urban voter divide are gaining strength, not just as a way to describe Trump’s supporters, but also as a way to explain why people support him. In previous elections, this divide was known as the “Red State-Blue State” phenomenon. Yet today this phenomena might more accurately be described as a “Red State-Blue City” divide as Josh Kron of The Atlantic puts it. The data supporting this analysis shows that rural and small town voters across the country have consistently supported Republican presidential candidates, not just in Louisiana and Texas, but also in California, Pennsylvania and New York. In fact, from a geographic point of view, the only areas Democrats have won consistently in recent years are the urban centers.

The U.S. Department of Agriculture, according to NPR, “categorizes counties on a nine-point urban-rural continuum from cities with populations of more than 1 million to rural, sparsely populated areas.” In the 2102 presidential election, Mitt Romney won eight of the nine USDA categories handily, yet lost every metro area with a population over 1 million, with the exceptions of Phoenix, Oklahoma City, Fort Worth and Salt Lake City. In contrast, Obama won only 689 of 3,144 counties (22%) in 2012. But he won nearly every major city and metropolitan region in every state, no matter how red. Atlanta, Dallas, Houston, Charleston, Denver and Las Vegas all voted for Obama, along with every other large city and metropolitan region across the country. Obama was elected not because he won everywhere, but because he won big in the most populated areas.

What makes Republicans including Trump so popular in rural communities? Explanations run along two axes: economic and cultural. Focusing on the economic, rural areas all across America are losing people and with them development, jobs and opportunity. The USDA’s 2016 “Rural America at a Glance” reports that the “number of people living in rural counties stood at just over 46 million in 2014,” amounting to 15 percent of U.S. residents, an all-time low. Yet, this population continues to decline each year by about 30,000 people, in sharp contrast to urban populations that “continue to grow by more than 2 million per year.”

“Population Projections of Louisiana Parishes through 2030” by Dr. Troy Blanchard confirms this for Louisiana: People are moving to the metro regions and leaving rural areas as jobs and opportunities dry up. All across Louisiana, urban parishes like Lafayette, East Baton Rouge and Jefferson are gaining residents. What fuels the growth of these parishes is partly the gradual emptying of rural parishes like East Carroll (down 17.6% between 2000 and 2010), Madison (-11.95), Red River (-5.5), St. Landry (-4.9), Tensas (-20.6) and Winn (-9.4%).

What migrants leave behind in these rural parishes are poor schools, unemployment,

poverty, declining life expectancy and increasing drug use. Those who stay are usually older, poorer, sicker, less educated and less mobile. Residents of poor parishes have witnessed this dynamic unraveling for a generation. Imprisoned by declining opportunity and influence, Trump’s entrepreneurial promise to “Make America Great Again” resonates with these citizens of rural America and those in small towns. They may have been great once but are not now. They have a past but not much of a future. They are given little but lip service by the other candidates.

It is to this group that Trump pitches his appeal. Rural constituencies hear and believe.

Pearson Cross is an associate professor in the Political Science Department at UL Lafayette. He holds a Ph.D. from Brandeis University (1997), and his principal areas of teaching are state and local politics, and Southern politics. Cross interviews local politicians and newsmakers on his radio show, “Bayou to the Beltway,” which airs on KRVS 88.7 FM at 12:30 p.m. on Wednesdays and 5:30 p.m. on Saturdays. Contact him at [email protected]