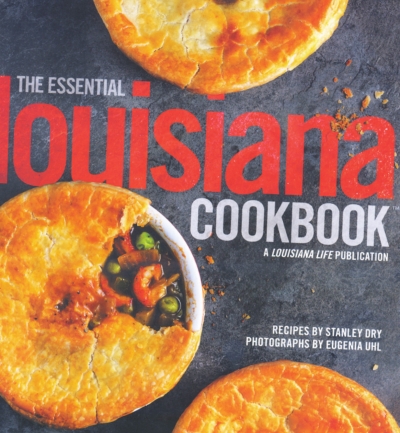 I first spotted Stan Dry at the New Iberia Farmers Market. One day he was buying strawberries. The next he was selling home baked bread. “Who is this guy?” I asked around. “He’s a cook,” was one answer I received. “He’s a writer,” someone else replied. Cooking? Writing? That sounded right up my alley. I meandered over and bought a loaf of bread. That was nearly 20 years ago.

All that cooking and all that writing has just culminated in a new book, The Essential Louisiana Cookbook, just out in time for Christmas. I can’t recommend it more highly. Dry cooks with the directness of a home cook who finds his inspiration in the freshness of Louisiana’s finest ingredients: shrimp and oysters, andouille and boudin, blackberries, satsumas, persimmons and pecans.

His style? Keep it simple. Shrimp tossed in the pan with smoky paprika and garlic.

Cooking time 20 minutes. A fried egg tops bacon and sweet potato hash for breakfast. Make it while you’re dripping the coffee. Or if you’re in the mood for trying your hand at pastry, Dry fills his dough with smothered Swiss chard and andouille for a savory turnover to warm a winter night.

This is not a coffee table book, glossy and unwieldy, although the beautiful photos by Eugenia Uhl make every recipe immediately tempting. This is the kind of cookbook that will wind up gravy-splashed and coffee-ringed, a first tier go-to on a daily basis.

“I want people to use the recipes,” says Dry. “It’s about what people eat at home.” A Louisiana native, Dry grew up in Shreveport and attended UL Lafayette. Graduate studies in history, a literary bent and a love of food took him to Chicago, then Boston, where he worked as a caterer, restaurant consultant, and food and spirits writer for Boston Magazine. That writing gig led to a seven-year stint as the restaurant editor at Food and Wine magazine in New York City.

But the tug of Louisiana is as strong as the tide. “I was divorced, tired of winter in big cities, looking homeward,” he says. Even Lafayette was too big. Food writer and friend Marcelle Bienvenu found Dry a haven at Bayou Jack, a small enclave right outside of New Iberia. Hurricane Rita washed him up into the Queen City.

During those years, beginning in the late 1990s, Dry cooked — offshore, on a jack-up boat — and wrote features for the New York Times, cooking columns for Louisiana Life and was involved in starting Louisiana Cooking magazine.

From The Essential Louisiana Cookbook:

Place shrimp in a roasting pan. Place remaining ingredients in a small mixing bowl, and whisk to combine. Add contents of the mixing bowl to shrimp, and toss gently to coat. Set aside for an hour.

Preheat the oven to 400 degrees. Bake shrimp for 10 minutes, then stir the contents of the pan, and bake for another 10 minutes.