Downturns are an opportunity to improve and innovate.

We can agree that for the past decade or more, Lafayette has ridden a wave of great economic fortune. We’ve seen record retail sales, record home sales, strong employment numbers and booming local stocks. With weakened oil prices, that momentum has started to slow. I’ve spoken with many industry experts and economists and no one knows with certainty how deeply or for how long Lafayette’s economy will be impacted by depressed oil prices.

Through the Economic Performance Index, LEDA hopes to explain the changes that the local economy is facing and present the data to you in an easy-to-understand format. It’s an objective view of the economy as a whole, not just a piece of the economy. The Index will help us identify changes in the economy and quantify the impact.

The March 2015 the Index is 112.2, down 4.3 percent compared to March 2014. This is a relatively minor decline compared to when the EPI dropped 13.5 percent in one year during the Great Recession. The EPI had been on a consistent upward trajectory until it leveled off in the second half of 2014, and then slipped in the first quarter of this year, as seen in Figure 1. Currently, the EPI has been lower than the 12-month moving average for four consecutive months. When the Index is above or below the 12-month moving average for three or more consecutive months, it represents a shift in economic momentum.

Since hitting a decade-low in August 2009, the Index increased 16 percent to the high of 119 in June of last year. This economic prosperity has created many opportunities, including business recruitment announcements from Bell Helicopters, CGI, Perficient and Enquero and expansions by CSE ICON and Global Data Systems.

The amount of recent investment in Lafayette is a reflection of our economic strength and diversification. While the local economy has diversified its industries, we are not immune to sustained pressures to a predominate industry — like we are experiencing now with the drop in oil prices. It is difficult to get a clear picture of the impact this will have on the local economy.

I especially want to note that a key lagging indicator that LEDA will closely watch is Rig Counts, and you can read more about those in the breakdown of indicators below.

It’s important to keep the big picture in perspective, and we can look at this from different angles. You can be a pessimist and think we’re headed for a repeat of the 1980s. Or you can be a realist and see this as an opportunity to use our Cajun ingenuity and wildcatter mentality.

In the past, our community and our businesses have used downturns or slow times as a chance to improve and innovate, to succeed and shine. Let’s roll up our sleeves and do that again today. 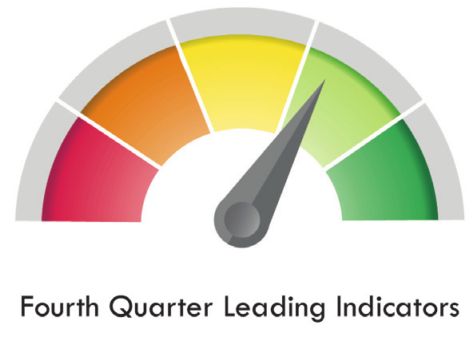 Leading indicators are those that change three to six months prior to the overall economy showing signs of adjustment. The drop in oil prices in June and subsequent decline in November began to impact all leading indicators during the fourth quarter 2014 and the trend has continued into the first quarter of 2015. Moving forward, we will watch for improvement in these leading indicators as the first sign of a pick-up in the economy.

Lafayette Average Weekly Initial Unemployment Insurance Claims in the first quarter of 2015 experienced a large spike after the 2014 holiday season — increasing from 75 to 146. Average weekly claims in 2014 were the lowest they have been since before the recession in 2008; and no month since February 2013 had average weekly claims higher than 100 until January of this year. Higher reports for 2015 indicate an undesirable shift in local unemployment that will soon be reflected in other indicators.

The Lafayette Stock Index hit an all-time high in the second quarter of 2014; however, a sharp decline in the fourth quarter continued into the first quarter of 2015. Because four of the eight companies included in the Index are in the oil and gas industry, it has responded accordingly to the decline in oil prices. Since June 2014, the Index has fallen 17.9% to 234.52 in March 2015. However, to put things into perspective, it is still twice as high as February 2009 when it hit a 10-year low. Though the Index has recently dipped, local stocks are in relatively good shape.

Louisiana Average Manufacturing Weekly Hours totaled 43.6 hours worked a week in the first quarter — more than the first quarter of 2014, when the average was 42.4 hours. November and December 2014 saw average weekly manufacturing hours reach a nine-year high of 45.7. Though economists consider anything above 40 hours per week ideal, this sudden spike in fourth quarter hours could be regarded as negative. The rapid increase was most likely due to manufacturers relying on fewer employees working longer hours to maintain productivity. Hours have since deceased to 42.5 hours per week in March, possibly signaling a fewer orders to fulfill.

Residential building permits in Lafayette, Broussard, Youngsville and unincorporated areas of the parish saw a 12.3% decrease from 389 permits in first quarter 2014 to 341 in first quarter 2015 — breaking from the two-year trend of more permits. Permits in 2014 were the highest ever besides the post-Katrina boom in 2006, totaling 1,592. The recent decline hasn’t happened in one place, as permits have been down in all locations in the parish.

In the first quarter 2015, the Bureau of Safety and Environment Enforcement approved 15 drilling permits in the Gulf of Mexico — significantly lower than the 33 permits issued during the same quarter in 2014. Louisiana drilling permits are down 40% — 234 permits in 2015 compared to 392 in 2014. Record-low drilling and record-low permits on top of low oil prices definitely present challenges to local companies. Oil and gas companies will tighten the purse strings until prices begin to climb again which means Gulf of Mexico and Louisiana permits are expected to remain low. 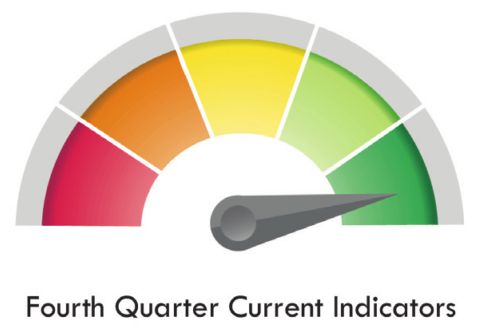 Current indicators—those that change at the same time as the overall economy—continue to show strength in the first quarter as all of the indicators are outperforming fourth quarter 2014. The strong performance of the current indicators is a testament to the confidence and resiliency of local consumers. We will closely monitor current indicators in the immediate future for signs of adjustment similar to those seen in the leading and lagging indicators.

Retail Sales remains a key economic indicator because it illustrates the level of consumer spending and confidence in a community. We are coming off of a record-setting year when we saw $6.4 billion in total sales and 10 of the 12 months seeing $500+ million in sales. Retail sales in the first quarter are 1.9% higher than in the first quarter of 2014. The dip in leading indicators has impacted retail sales. The first three months of 2015 have been below the 12-month moving average, possibly indicating sales may continue to dip over the year.

Lafayette Parish Hotel/Motel Receipts in the first quarter of this year are nearly identical to receipts in the first quarter of 2014. Through March receipts totaled $20.90 million, compared to $20.93 million in 2014. All but three months in 2014 saw the highest Hotel/Motel Receipts on record for their individual month. It will be hard to keep that pace again this year given the performance of leading indicators. For the time being, Retail Sales and Hotel/Motel Receipts continue to demonstrate the strength of the Lafayette hospitality market. Even if receipt totals are modest this year, there will be a boost for local hotels in October from LAGCOE, the second largest oil and gas expo in the nation.

Non-Farm Employment in the Lafayette MSA is still holding strong in the first quarter. The new, larger MSA (Lafayette, St. Martin, Iberia, Acadia, and Vermilion Parishes) had 220,000 jobs in March of this year. This is only 100 jobs fewer than in March 2014. The mining industry, which is primarily oil and gas, showed a 1,000 job loss over the past year. However, job gains in other industries have balanced out those losses. Retail has increased by 1,300 jobs, financial services by 300 jobs, and the manufacturing industry has increased by another 500 jobs. Based on leading indicators, declines in the mining and manufacturing industries may spread to other industries at some point this year due to continuing weak oil prices.

The mining industry, which is primarily oil and gas, showed a 1,000 job loss over the past year.

The Average Home Sale Price of single family homes in the Lafayette area in the first quarter was $201,682 — 15 % higher than the 2014 first quarter average price, $175,431. Despite some month-to-month volatility, the average sale price has been slowly growing since the beginning of 2012. The 12-month moving average has also been climbing since late 2012, reinforcing the upward trend. 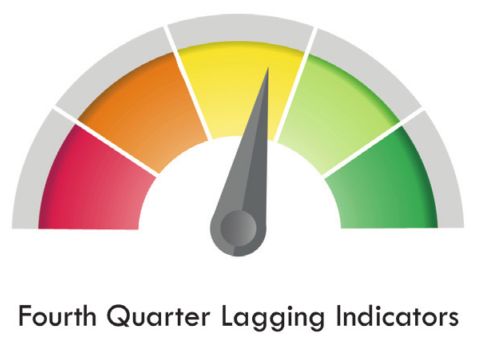 The first quarter average unemployment rate is 5.3%, higher than the 3.3% in 2014. The increase in unemployment is not a surprise given the initial unemployment claims data from the fourth quarter of last year.

The first quarter average unemployment rate in Lafayette Parish is 5.3%, higher than the 3.3% in 2014.

Bankruptcy filings in the Western District of Louisiana have continued to decline following major improvement between 2010 and 2012 after the recession.

There were 85 rigs on and offshore in Louisiana in March of this year, down from the 105 rigs in March 2014. The rig count shows oil and gas producers’ longterm confidence. When prices decline as they have since June of last year, there is less money to spend on exploration. Rig counts are slower to respond to oil prices because rigs must complete contracted jobs before decisions are made to cease operations and company executives are waiting to see if price declines are short or long-term impediments. With that being said, rig counts noticeably decreased in March with a hefty drop from 107 in February to 85 in March.

According to industry experts, we are in for a rough ride in the coming months. To put a price tag on it, production companies are making $66 million dollars a day less in the Gulf of Mexico compared to last year, given production rates and commodity prices. Still, the current downturn in oil prices should not be a repeat of the situation seen in the 1980s. Along with overall economic diversification, diversification within the energy industry will help to mitigate the impact. At the high point in 1981, 19.6% of the Lafayette MSA’s workforce was employed in mining; today that’s 10.7%.

Lafayette’s economy will continue to adjust to the price of oil. Local layoffs are expected; however, most company officials will first look to other cost-cutting options. Many in the industry still remember the generation of workers lost to other regions in the 1980s.

Recently Stevie Toups, senior vice president and CIO at Turner Industries (Baton Rouge’s largest employer) who also serves on the board for the community and technical college system, said in order to keep pace with demand from petrochemical and LNG growth, we will need an additional 40,000 industrial workers in the next two years between Beaumont and New Orleans. Many oilfield workers who have been displaced or will be in the coming months may quickly find comparable employment based on that demand.